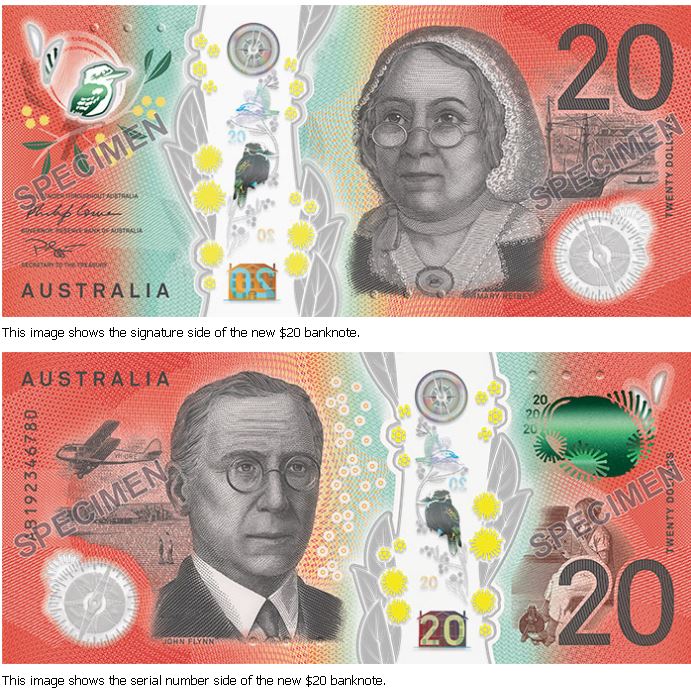 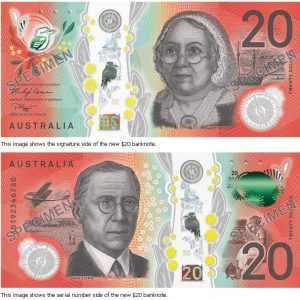 Australia’s new $20 note has a tactile feature to help the vision impaired. The $20 has three raised bumps along the long edges to help distinguish it from other denominations.

The note is the fourth to include the tactile feature, joining the $5, $10 and $50 notes, and will be unveiled in Melbourne on Tuesday morning.

“These tactile features enable the 350,000 Australians who are blind or have low vision to now accurately and easily identify the cash they are handling, like the rest of the community, and that’s how it should be,” a spokeperson said.

The note will enter circulation on October 9.

The $20 banknote will be released into general circulation on 9 October 2019. It celebrates Mary Reibey, a convict who broke out of rigidly defined social norms to earn a reputation as an astute and successful businesswoman, and the Reverend John Flynn, who pioneered the world’s first aerial medical service in 1928, now known as the Royal Flying Doctor Service. Reibey’s story is recognised on the banknote through an image of a Port Jackson schooner in Sydney Cove in the early 1800s. Beside it is a traditional Eora nowie (canoe). Aboriginal women fishing from these vessels were a common sight on the harbour in Reibey’s time. There are also images depicting an De Havilland Dragon aircraft and a pedal powered transceiver developed to improve communications in remote areas, representing Flynn’s story.

Each banknote in the new series also features a different species of native Australia wattle and bird. The $20 banknote features the Acacia Buxifolia and the Laughing Kookaburra (Dacelo novaeguineae).

All banknotes issued by the Reserve Bank remain legal tender and can continue to be used.