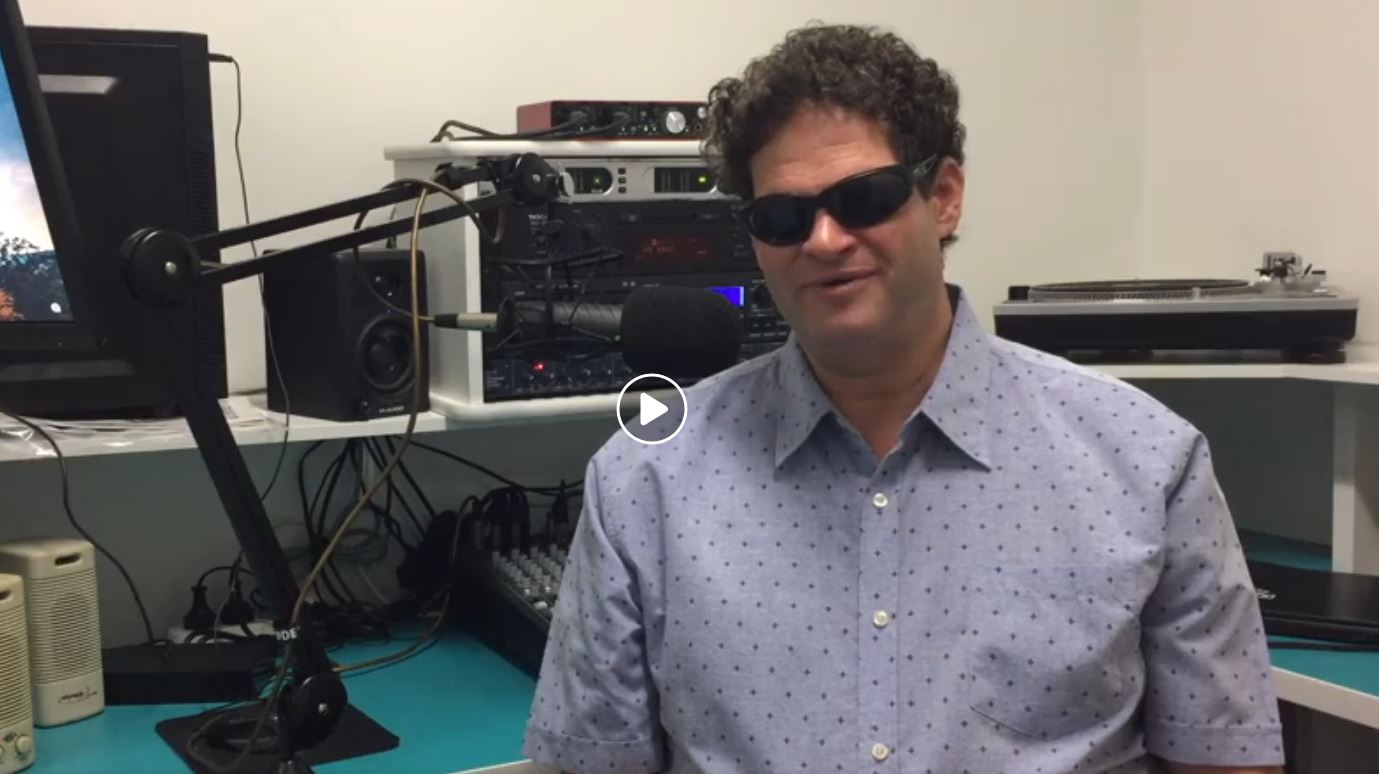 Steve Sparrow is a Producer on Radio 4RPH in Brisbane and he also has is own production studio, he is a musician and a man of many talents which you will see in this video.

(Transcript of the video follows)

Hi Steve, tell us a little bit about yourself and how you came into contact with braille house?
My name is Steve Sparrow I’m a producer at radio 4rph, which is we’re in the studio of 4RPH now and I’m also a musician singer-songwriter, and I also run my own recording studio, so I’m pretty well involved with the audio world, and as far as some as far as Braille House, Well, most of us blind people, as children were pretty well acquainted with Braille House, because we really grew up going at school we went to a lot of the Braille writing literacy competitions and all that stuff and cause we got a lot of our textbooks the we used in the classroom majority of them came from Braille House so, Braille house is something that I think most blind people are pretty familiar with up here and they do a fantastic job and it’s just great to see that the work they are doing is still continuing.

Steve can you tell us a little bit about reading and how you’ve been able to read to your family?
Yeah, my son Craig is fully sighted and he was born in 2005 and I said to my wife one day, when he was about 1 or so or thereabouts I think, “I might contact for Braille House and see” cause the hassle is that it’s not very easy for me to read to him and I needed to be able to. I called up Braille House and explained the situation, so I contacted Braille House and they sent me out a bunch of books that I was able to read to Craig, and it just made things so much easier, books like Thomas the Tank Engine and a number of other things and there were a few picture books as well, and they were pretty interesting because Craig was able to that was able to look at the pictures and I was able to read him the text and I think we have classics like the old 3 Little Pigs and all that stuff and a bunch of other stuff to and a lot of those stories that I read to him, he still remembers now, because I only had a limited supply of books we tended to read similar stories quite a bit, and then he had his favourites. you know they’re still stories that he still talks about now and without Braille House I wouldn’t have been able to read to him at all so I’m really pleased that that service exists and, back in those days braille displays didn’t really exist and they weren’t very popular if they were and if they did they were really expensive so I certainly didn’t have one. If you don’t know many people don’t have a braille display now, so it’s really good that service exists, so that we can carry out something like this and it makes our task of reading to our kids a lot easier. Hopefully someone else. Can do similar things.

You mentioned the Braille challenge, how important has this been for meeting other blind people and creating social networks?
Yeah it was pretty good because we used to meet kids from all sorts of other schools well, so you know, I actually made a couple of friendships from that challenge it was really cool and we got to know some of the staff and you know, people like Mercy Dickinson and all these people who were around that time and they all made us feel very, very welcome and the morning teas were awesome. They used to put on a really good little morning. We all used to get the school bus out there, they would take us all out there and there was about 20 of us or 15, something like that. It was good because it made you step up to the mark a little bit, and you know it was coming so you’d make sure you did a little bit of practice and make sure your reading skills where really sharp, and it was it was a lot of fun.

Can you tell if a little bit about the importance of being able to read Braille and what that has meant for your career?
Well, I think Braille is imperative for what I do now, look, in many cases, I will use a screen reader for things like emails and screen readers, of course, are very big part of my life and the thing is that with Braille, it’s good to be able to read a book in Braille. The thing is, it’s nice to be able to sit down and read a book in a Braille format. So, one thing that screen readers are really useless for is (in my opinion anyway) is if you want to do a speech or something like that where you’ve got to read notes, it’s not very easy to listen to a screen reader and talk at the same time. It is doable and I have done it, and there are some people who do get around it but, (I’m telling you now) it’s not a very easy thing to have to do. The other thing I use Braille for all the time for is, I’m a musician as I said before, and I’m playing a lot of performances at all different sorts of venues and I do some music festivals in different parts of the country and basically, all my set lists and everything. I have in braille format because there’s no way I can be listening to a screen reader talking to a band about what’s happening, and you know, keeping track of the what’s going on as far as I don’t have to remember like a whole 45-minute or an hour long show, so it’s all in a Braille format. Without Braille, a blind person is almost illiterate because they can’t actually, physically read, so I can’t see how a blind person could exist entirely without Braille if they’ve learnt it when they were younger, probably older people they not read braille and that’s fair enough but for myself, that’s how I learnt Braille and that’s how I learnt to read and its a very important part of my life.

Radio 4RPH ids radio for people with a print handicap, are you able to tell us about the importance of this service to the community?
I’ve been involved with 4rph for many years, I came to 4rph as a young man, I was about 20 or 21 (thereabouts) so I’ve been here for a while and I’m a producer at 4rph so I’m producing their programs and I produce we call program promos, which little 30 second or 40 second small adverts to tell people what the program is, and we have done all sorts of things like that. Radio 4rph stands for radio for the print handicapped, what we do is basically we’re a reading service, so we read newspapers, we read magazines and all sorts of things that blind person may otherwise not have access to. I think that’s a really good thing that the station exists because without that, we would not have access to certain information and, going back to braille again, I also do a lot of voicework on the station, so often I’ve got to read scripts and other bits and pieces and without Braille it’s not possible for me to do that, so I will write it all down in braille, and then I’ve just got it under my fingers, and I can then do what I need to do, so, that’s another reason (for me) that I couldn’t really exist without Braille. 4rph been a big part of my life for a long time and we have lot of fun here. It’s really is a good thing to be part of it.

How important is 4rph to the listeners?
Yeah, I think the listener sort out the age. We get a lot of feedback from the listeners and we get lot feedback from people that aren’t necessarily blind people, so we also have a lot of people just driving to work in the car that they don’t have time to read the paper, so they will listen to us and I think that’s good to know that we are out there in so many ways, and I think it’s just a good service and people connected in another way.

If you could share any advice for a young blind person what would that be?
Well, yeah, I mean to thing is that Braille is a very important thing to know if you if you get a bit to get a bit over reading. It is very hard to do things without Braille entirely. It’s possible to do anything you want to do if you put your mind to it is sometimes you need some help. You need to do things in different ways and you probably will need assistance. That if you really want to do something work hard as you can on your passion because I’ve managed to achieve quite a bit in my life. I’ve got albums out myself as a singer-songwriter, and I’ve put myself out there. I run my studio. I work at 4rph. They’re all things I’ve been passionate about. So, if you’re passionate about something and you want to do it. You might have to find another way around some areas, but if you really want to do it, you should do your best. To do the best that you can actually do and hopefully enjoy your life, it’s worked for me anyway.

Do you have a message for any sighted people watching this?
I haven’t really thought about that I guess, but what I would say is thanks to all the people that have assisted me when I’ve needed help, and there’s often times when I’ve been wondering around in the end of either come a cropper and got myself lost in some way and I guess what I’d like to say is thanks for your assistance when I needed it, because without it I’d probably be a bit sort of bushed.