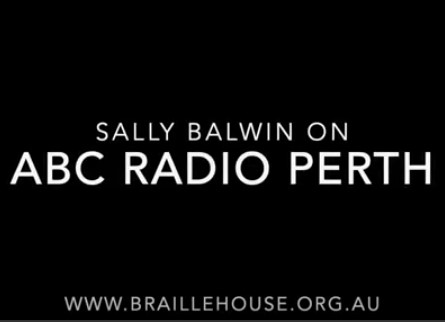 Below is a transcript of the interview between Di Darmody from ABC Radio Perth and Sally Balwin from Braille House.

Di Darmody says “The Dickinson Memorial Literary Award is in it’s 99th year, apparently it was set up as a competition for children and adults who are blind or have low vision, but for the last 6 years the competition has expanded to include absolutely anyone (Even the sighted).

The award is hosted by a voluntary association called Braille House, Sally Balwin is the General Manager and she joins us this afternoon

Sally – Hello Di, thank you for having me.

Di- How did Braille House get involved in this award?

Sally – I think it was one of those things where it’s evolved from a number of organisatons, when it started in 1921, it was with the Queensland Musical, Literary and Self Aid Society for the Blind. So as not-for-profits evolved throughout the years, it’s moved from different associations and eventually finding it’s home at Braille House.

Di – So it’s a national competition (I guess) how does W.A. usually fare?

Sally – So we were very excited.

Di – As I mentioned, this has a very long history and was originally set up as a competition for children and adults who are blind or have low vision, but, you’ve extended out the competition over the last few years, why was that.

Sally – We actually had some feedback from participants so historically it was mainly for adults and it was only to do with writing short stories, it then evolved into short stories and poems, and then into various categories. As we spoke to participants in order to attract more people (particularly young people) into the competition, the feedback to us was we needed to expand what could be submitted, and also, people thought it should be good to be open and not just competing with other blind people. So that’s where the people’s choice category came in for the first last year which is open to sighted to sighted as well as blind and low vision people.

Di – So you have a variety of categories people can enter?

Di – So if people’s interests have been piqued and they think “oh yes, I think I could enter that” do you have a cut-off date or somewhere they can find some more information?

Sally – Yes, they can go to our website which is www.braillehouse.org.au there’s a whole lot of information about how you can participate and the entry forms and everything and the cut-off date is late in August.

Di – Now, I understand that Braille House also has a bookshop?

Sally – It does, it has Bookshop 507, which is a fundraising activity for Braille House where we recycle print books to fund Braille books, so reading funding reading which we thought was a really good fit.

Di – It is, and I learnt this morning, and I didn’t have any idea about these, about eBraille readers, can you tell me about them.

Sally – Yes, so with the evolution of technology, like a sighted person can download books onto a device, so to can a person who is blind or low vision who is a Braille user so it’s a device that has a panel on it so when you download the actual book, pins pop up the way to create the Braille, and so then you run your fingers across the pins and you can read it as Braille and then you can hit a button and they all drop down and the next line comes up so you’re just reading the Braille on the device.

Di – I did hear that Happy Potter is a very large volume when it comes in an ebraille reader.

Sally – Yeah, so if you were to actually have an embossed copy of the Harry Potter, it’s actually 11 volumes.

Sally – So ebraille makes it a bit easier to read it on the bus and everything.

Di – It does indeed. Another interesting fact that Braille House was set up by Lady Lamington, and there’s an interesting link today which I’ll tell people shortly, but is it true she was the person that the lamington was named after?

Sally – Well, there’s a bit on controversy over that,

Di – Well, I mean, look, if you’re passionate enough to set up an appreciation society for lamingtons I think you have the right to say who was responsible, don’t you?

Sally – Exactly right. The first recipe in Australia to be published for the lamington was in 1902 in Country Life and they say it was named after Lord Lamington, so I think it was someone ion the family.

Di – I think, well look, the name at least. Thank you for telling us about this writing competition this afternoon, I hope you get lots of entries from W.A. and we can have a winner like Chloe in 2020.

Sally – Terrific, thank you very much.

Di – Sally Balwin, she’s the General Manager of Braille House and if you are interested in taking part in the Dickinson Memorial Literary award, it’s in it’s 99th year, what a history it has, originally started for children and adults who are blind or have low vision but it has been extended out as well so lots of people can take part in it. Just look up Braille House online and I’m sure you’ll be able to find the information you need there.